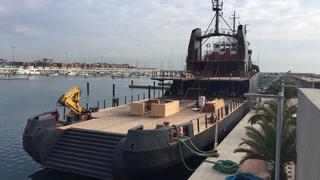 The 58 metre event motor yacht Black Diamond has been listed for sale by Eric Trupheme at Ocean Independence.

This tri-deck yacht was originally built with a steel hull and superstructure by Dutch yard De Waal Shipyard and delivered in 1975 as a robust ice-classed tug serving the North Sea oil industry. In March 2015 she was converted into a party yacht designed to entertain up to 450 guests when anchored at events such as the Monaco Grand Prix or Cannes Film Festival.

As such, the emphasis was placed on maximizing deck areas without the need to create extensive accommodation for guests on board and it was anticipated that she would cruise only between events and remain at anchor to host cocktail parties and receptions. Thus she now has vast deck areas and a solitary en suite double cabin below for two guests.

Plans, however, always change and she is now being promoted as a yacht for sale suitable for a further ‘easy’ conversion into a shadow vessel with plenty of room for large tenders, water toys and a helicopter. Below deck, there are two office areas for meetings, toilets and a bar, although the DJ platform high up between the two funnels might be deemed superfluous.

Black Diamond offers spacious accommodation for 22 crew and is commercially classed in Panama. Twin powerful Stork Werkspoor 4000hp diesel engines give her a range of 9,000 nautical miles at 11 knots and she has a cruising speed of 10 knots.