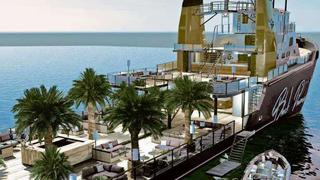 The tri-deck boat, originally called *Dewaal *and built by NV Scheepswerp in 1975, has a 14 metre beam and can take no less than 450 guests at anchor. Her robust looks stem from her origins in the high latitudes where she needed an ice glass certification. There will be nine crew on board the steel superyacht, which will be powered by a maximum of twin 4000hp engines giving a top speed of around 10 knots. However, she will cruise only between events and will remain at anchor while hosting guests.

Being an al fresco party boat,* Black Diamond* will be heavier on deck space than on cabins, which will number only one with a double berth. However there is a fine dining area totalling 220 square metres on the bridge deck and a VIP area on the main deck. The boat is designed to cater for large corporate or private events with the Monaco GP, Cannes Film Festival, Cannes Congress and other big festivals in mind. She will also operate as a floating nightclub on the South of France and in Ibiza.

Two 20-guest tenders will ferry people from shore to ship, where they can alight to customisable areas via safe staircases on both sides of the boat and a welcome fountain. There are two office areas for meetings, toilets, a bar and a DJ platform high up between the two funnels, overlooking the deck areas.