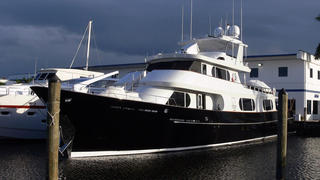 The 30.5 metre expedition yacht Bravo has had a central agency change and is now jointly listed for sale with Bradford Marine and Northrop & Johnson.

Built in aluminium by US yard Stephens Marine, Bravo was delivered in 1975. In 1997 she sailed to McMullen & Wing in New Zealand where she was stripped back to the bare hull and extended to her current length of 30.5 metres. Her superstructure, machinery, interior, carpentry, piping and plumbing were new in 1997 under the design and supervision of naval architect Bill Tripp. The result was a superior, successful, seagoing yacht.

Further refits in 2008 and 2013/14 included major upgrades to mechanical, electrical and running gear systems plus new interior furniture. Accommodation is for eight guests in four cabins. The master suite is situated in the centre of the lower deck, and there are two identical cabins with queen sized beds and Pullman berths. Additionally, the on-deck spa and media room can be converted into a fourth cabin.

Outdoor spaces on this yacht for sale include a large flybridge under a full hard top installed in 2013 while the aft bridge deck has all the amenities for al fresco entertaining and dining. Twin MTU diesel engines give her a cruising speed of 12 knots.