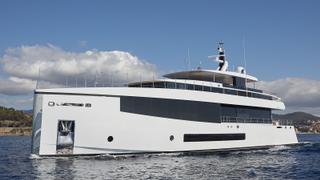 The 34.65 metre motor yacht Letani has been listed for sale by Cecil Wright & Partners.

Built in aluminium by Dutch yard Feadship to a design by De Voogt, Letani was delivered in 2017 as the fourth hull of the yard’s Lagoon Series. Accommodation is for eight guests split between an owner's cabin, VIP suite and a pair of convertible staterooms. Meanwhile the crew quarters comprise three cabins, allowing for a total staff of six people on this yacht for sale.

Feadship claims that this design features the highest proportion of superstructure glass that is has built to date. The vertical prow makes good use of her total length, while the extensive superyacht sundeck provides several options for relaxing in the open air. In addition, she was awarded a Neptune trophy in her category at the 2018 World Superyacht Awards.

With a beam of 7.9 metres and a maximum draught of just 1.8 metres, Letani has been designed to cruise the shallow waters and smaller marinas of Europe, Scandinavia, the Indian Ocean and Asia. The yard adds that this project was completed in record time, with just two years between first meeting and launch. Her top speed is 20 knots and she boasts a maximum cruising range of 3,200 nautical miles at 10 knots with power coming from two 1,800hp MTU 12V2000M93 diesel engines.