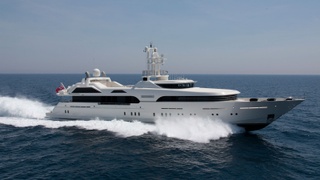 The 49.5 metre motor yacht Sussurro has been listed for sale by Burgess.

Built to ABS class in aluminium by Dutch yard Feadship with design by De Voogt and naval architecture by Don Shead, Sussurro was delivered in 1998 and has been meticulously maintained throughout her current ownership, including a recent full repaint.

An interior by designer Terence Disdale accommodates up to 12 guests in five cabins comprising a master suite, two doubles and two twins. All guest cabins have entertainment centres, television screens and en suite facilities while the crew quarters sleep 12 staff aboard this yacht for sale.

With 15,000 combined horsepower, Sussurro is capable of speeds as high as 46 knots. For added safety and comfort, she is fitted with Quantum zero speed stabilisers.