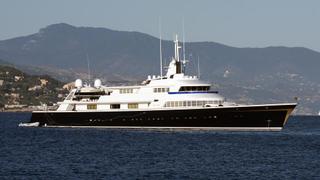 The rather battered 70.68 metre motor yacht The One has been sold with Altinel Shipyards in Turkey acting for the buyer and seller.

The One was built in steel and aluminium by the German yard Lurssen and delivered in 1973. She was the first major yacht designed by the late Jon Bannenberg and was also a breakthrough for the builder, which had previously specialised in military vessels.

Before Bannenberg, yacht design did not really exist as a distinct occupation. Naval architects designed what they hoped were efficient and good-looking hulls and left the shipyard to complete the interior. Bannenberg made art his starting point and sought to design every feature of a yacht from the exterior down to the doorknobs to achieve a completely consistent result.

Unfortunately, a major yacht fire broke out at Marmaris marina in Turkey that devastated two prominent superyachts on January 4, 2016. The blaze originated on board The One at around 0200 local time before spreading to a neighbouring vessel, the 52 metre Al Jadaf superyacht Barbie.

Prior to this awful accident, The One had accommodation for 10 guests in five cabins comprising a master suite, VIP suite, a double and two twin cabins. She was powered by twin MTU diesel engines giving her a cruising speed of 22 knots topping out at 28 knots. Following a two year rebuild in Turkey, she will be delivered to her new owner in summer 2020.