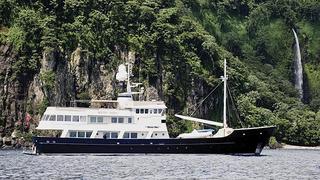 Dione Sky was custom built in the USA by Palmer Johson in 1996 as Turmoil to ABS class and her exterior design is by those experts in fine expedition yachts, Vripack. Under her present owner she made an impressive figure of eight passage around North and South America - a feat duly recognised by the award of the Voyager's Trophy at the 2011 World Superyacht Awards. In all, she has logged nearly 200,000 nautical miles since launch and made a successful transit of the North West Passage in 2001. Her rugged appearance belies a stunning, elegant interior in American cherry wood.

MCA compliant, Dione Sky has accommodation for 10 guests in a master suite, two double staterooms and two twin cabins, all en suite. She received an extensive refit/rebuild in 2007. Twin 819hp Caterpillar engines give her a cruising speed of 12 knots and a range of 7,000 nautical miles. Both engines were completely rebuilt in early 2013 meaning that Dione Sky is now ready for more worldwide roaming.

Dione Sky is now down from $18.9 million to $17.5 million. For more information contact: