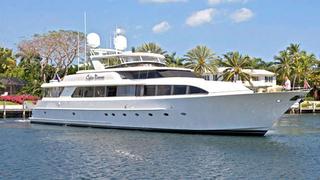 Galati Yachts has acted for the buyer and the seller in the sale of 34m motor yacht Cajun Dancer.

The yacht was launched by Westport in 1999 and has been extensively refitted since. She had both generators replaced and the engines overhauled in 2009, while in 2013 she had major replacements and refinishings. The flybridge was given a hardtop and a new bar and countertops were added, as well as a new hot tub. The exterior decks were also repainted or teak was added. Last August her bottom and running gear were renewed at Lauderdale Marine Center.

The interior has also had extensive upgrades, including new TVs and DVD players, restaining of interior wood and replacing the wall coverings with new valences throughout the galley and saloon. A custom chandelier was made for the saloon and sconce lighting added to highlight new custom dinning and saloon tables and etched glass. Mechanically the yacht had all air handlers and the water maker replaced and the chiller plants rebuilt. An Intellion 8 Sat TV Dish was installed and the existing Sea Tel V-Sat was rebuilt.