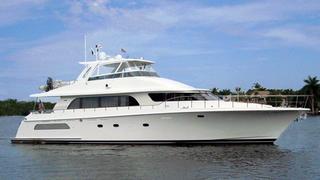 Built in 2002, she's been bought by a consortium of businessmen based on the Pacific Coast. Twin Caterpillar 3412 engines provide speeds up to 24 knots. After undergoing a three month refit in Ft. Lauderdale she will make her way to the west coast of Mexico. The yacht has spacious accommodation for eight in four separate suites with a crew of three and was asking $1.6 million.