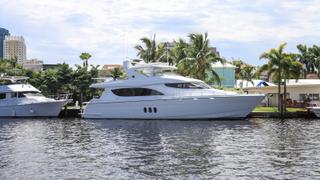 The 24.32 metre motor yacht Ocean View, listed for sale by Frank Grzeszczack Jr at IYC has been sold with the buyer introduced by Peter Giacalone of Kusler Yachts.

Built in GRP by US yard Hatteras to an in-house design, Ocean View was delivered in 2004 with several upgrades and refits since. Accommodation is for eight guests in four cabins comprising a full beam master suite, VIP suite, double and twin. All cabins have entertainment centres, flatscreen television sets and en suite bathroom facilities while crew quarters are for three members of staff.

The main saloon has sculptured carpets, a mirrored ceiling, settees and armchairs to port and an entertainment centre including a large screen television to starboard while forward is a formal dining area.

Al fresco entertaining and dining is readily available on the aft deck, fitted out with a settee at the transom along with a table and four folding teak chairs, while port and starboard stairways lead down to a broad swim platform.

Up on the flybridge are three helm seats, built-in upholstered seating, two fixed tables, a bar with three stools and a hot tub, sheltered by a partial hard top.

Twin 1,550hp Caterpillar diesel engines give her a comfortable cruising speed of 20 knots, topping out at 25 knots.