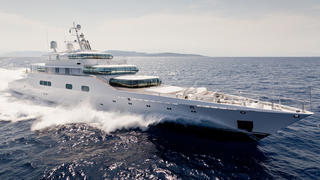 The 74.5 metre motor yacht Enigma, listed for sale by Edmiston & Company, has been sold in an in-house deal. This marks the second time that the broker has sold the iconic yacht, which will now be renamed Zeus.

Originally named Eco, she was built with a steel hull and GRP superstructure by German yard Blohm + Voss to a design by Martin Francis and is Lloyd's classed, with delivery in 1991. Her most recent refit in 2014 saw her interior refreshed and she received her Lloyds Register 20 year special survey which she passed with flying colours, ensuring that she is in immaculate condition.

An iconic, head-turning yacht in every harbour she enters, Enigma offers accommodation for 15 guests in six cabins consisting of a master suite taking up the entire upper deck and with private lounge and outdoor dining, a VIP suite and four double cabins on the main deck. All cabins have entertainment centres, television screens and en-suite bathroom facilities. In addition, there are quarters for 21 crew.

The main saloon is vast and includes a selection of settees and armchairs, coffee tables and a bar, along with an entertainment centre featuring a 60-inch flat screen television. The panoramic sun deck has a single saloon and a fully equipped gym. A special feature of Enigma is her ranks of convex glass in the windscreens of her three upper decks, making her instantly recognisable worldwide.

Special mention must be made of her incredibly powerful propulsion package. This consists of twin 5,000hp Deutz diesel engines and a General Electric 18,500hp gas turbine driving KaMeWa water jets to speeds of up to 34 knots.