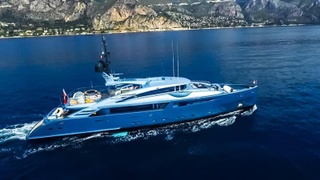 The 43 metre motor yacht Philmx has had a central agency change and is now jointly listed for sale by Black Orange Yachts with Ocean Independence.

Delivered in 2014 by Italian yard ISA to a design by Andrea Vallicelli, Philmx features a steel hull and aluminium superstructure with striking blue paint job that will stand out in any marina.

Her sophisticated and modern interiors come courtesy of Sandrine Melot, and feature accommodation for a total of 10 guests in five cabins, including a full beam main deck master cabin, two convertible doubles and two twins. Her crew accommodation meanwhile allows for a staff of eight aboard this yacht for sale.

Philmx has had the same owner since new and has been used as a successful charter yacht. Sunny afternoons are best spent on the sun deck which plays host to a Jacuzzi, bar, barbecue and a video projector cinema for movies under the stars. There's plenty to keep guests occupied down at the water's edge too with her extensive catalogue of water toys, including scooters, a TIWAL sailing boat, and a towable banana.

Power comes from two 1300hp Caterpillar C-32 diesel engines for a top speed of 16 knots and maximum range of 3100 nautical miles when cruising at 12 knots.