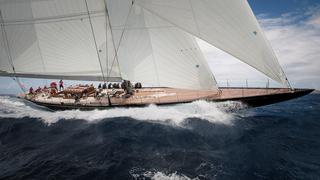 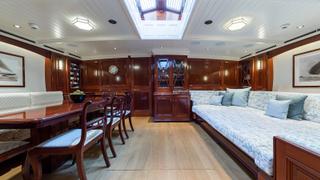 The 39.95 metre sailing yacht Rainbow has had a central agency change and is now jointly listed for sale at Northrop & Johnson with Yachting Partners International.

Designed by William Starling Burgess and built by Herreshoff in the USA, the original J-class Rainbow won the America’s Cup in 1934. Built by Dutch yard Holland Jachtbouw in aluminium with delivery in 2012, this 39.95m Rainbow replica is based on the original design, with a modern update from Dykstra Naval Architects.

Built for an experienced sailing yacht owner, she is the first J-class yacht with a complete hybrid propulsion and power system. This means fuel savings of up to 30% as well as a reduction in sound. She can sail underway in silent operation and has ample hydraulic power in racing mode. While the hybrid engine solution helped create space, careful planning was needed to fit all the pumps and instruments in a restricted space.

Lloyds classed and MCA compliant, Rainbow has a mahogany-paneled interior with a classic 1930’s feel and offers accommodation for up to eight guests and seven crew. Guest accommodation is in three cabins consisting of a master suite, double and twin with two Pullman berths and all cabins have full en suite facilities.