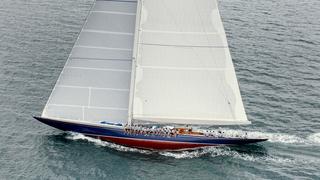 The historic 39.56 metre classic J Class sailing yacht Endeavour, listed for sale by Alex Busher at Edmiston & Company, has had a €2,500,000 price reduction.

Commissioned by aeroplane magnate Thomas Sopwith, she was drawn by British yacht designer, C E Nicholson, and delivered by UK yard Camper & Nicholsons in 1934. Her performance ahead of the 1934 America's Cup was superb. British attempts to regain the Cup had long been thwarted but here at last was a worthy challenger. Then, as if destined to heroic failure, mismanagement set a course that would doom the yacht to defeat.

The yacht raced for only four more years, with the last of them seeing her back in US waters acting as trial horse for Sopwith’s doomed Endeavour IIchallenge. However, while there she scored a win over the American Super J and 1937 Cup Defender Ranger – an achievement no other J Class yacht had ever managed.

For nearly 50 years Endeavour clung to a precarious existence. She and her younger sister were sold off and their lead keels were removed. Plans to convert Endeavour into a cruising yacht fell through, as did a number of rescue attempts while she was laid up at various locations on the South Coast of England. The last of these saw her moved to Calshot Spit, and it was there that US classic yacht enthusiast Elizabeth Meyer discovered her. She had not come seeking to buy Endeavour, just to see the supreme leviathan, but the yacht had found her saviour – and a hands-on one, too.

The steelwork was carried out on site before the project was relocated to the Royal Huisman shipyard in Holland, and in 1989 Meyer unveiled her achievement to an astonished world. She had succeeded against all the odds, and Endeavour was back, her original beauty fully revealed.

In 2011/2012 she was completely refitted with no expense spared, bringing her back to fine condition and only used privately since. Accommodation is for eight guests in a master suite, two doubles with en suite facilities and a twin with bunk beds.