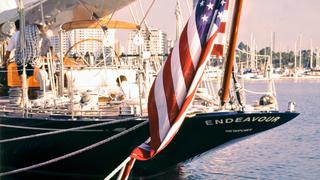 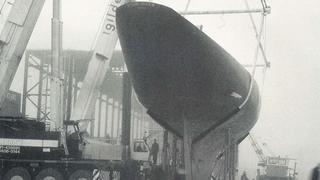 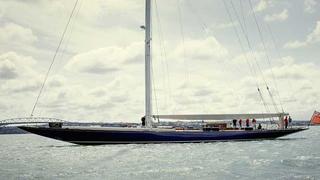 The most evocative of the great British racing yachts of the pre-war era, Endeavour, the ‘Darling Jade’, is uniquely beautiful and one of the greatest yachts of all time.

Commissioned by aeroplane magnate Thomas Sopwith, Endeavour was drawn by Britain’s leading yacht designer, C E Nicholson, but Sopwith, consistent with his hands-on role as helmsman and his access to state-of-the-art aerodynamics, contributed substantially to her technical prowess. If the hull was Nicholson’s work, the rod rigging, wind speed and direction indicators and other firsts were those of Sopwith’s right-hand man, Frank Murdoch.

Endeavour’s performance ahead of the 1934 America’s Cup was superb. British attempts to regain the Cup had long been thwarted but here at last was a worthy challenger. Then, as if destined to heroic failure, mismanagement set a course that would doom the yacht to defeat.

With some justification, Endeavour’s professional crew asked for extra money for the extended season they would serve but Sopwith refused. A brilliant amateur crew was formed instead and the challenge was back on course. The racing against Vanderbilt’s Rainbow was keen, but just as Endeavour developed a leading position Sopwith threw away the race series through poor tactics. Seemingly all difficulties had been overcome only for defeat to be snatched from the jaws of victory.

The aftermath was perhaps even worse for British yachting. Murdoch’s technical developments were too visible to be kept secret, and Nicholson, perhaps determined to save his personal prestige, gave a copy of Endeavour’s lines to the designer of Rainbow, W Starling Burgess. With all the advantages so painstakingly developed now thrown away, the result of the 1937 Cup was in effect settled in the days that followed the defeat of Endeavour.

The yacht raced for only four more years, with the last of them seeing her back in US waters acting as trial horse for Sopwith’s doomed Endeavour II challenge. However, while there she scored a win over the American Super J and 1937 Cup defender Ranger – an achievement no other J had ever managed.

For nearly 50 years Endeavour clung to a precarious existence. She and her younger sister were sold off by Sopwith and their lead keels were removed. Plans to convert Endeavour into a cruising yacht fell through, as did a number of rescue attempts while she was laid up at various locations on the South Coast of England. The last of these saw her moved to Calshot Spit, and it was there that Elizabeth Meyer discovered her. She had not come seeking to buy Endeavour, just to see the supreme leviathan, but the yacht had found her saviour – and a hands-on one, too. The steelwork was carried out in situ before the project was relocated to the Royal Huisman shipyard, and in 1989 Meyer unveiled her achievement to an astonished world. She had succeeded against all the odds, and Endeavour was back, her original beauty fully revealed.

One of the original J Class trio, Endeavour like fellow yachts Shamrock V and Velsheda, is in continual development. The 77 year-old yacht was relaunched on 10 October 2011 having just undergone a major 18-month refit at New Zealand yard Yachting Developments, which included work to the yacht’s interior, deck strengthening, a new winch package, a new mast and sails.