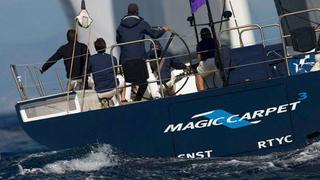 In the first day of 15th annual Les Voiles de Saint-Tropez regatta, it was the turn of the nearly 200 modern sailing yachts to go to battle on the race course.

This included the highly anticipated face-off between the two WallyCentos, Hamilton, launched in 2012, and the new Magic Carpet3, delivered in May 2013. While both got off to an aggressive start, it was Hamilton that gained and kept the lead to take the win in real time. Hamilton went on to best Magic Carpet3 in both of day's races, but in the overall Wally Class results after two races, it is the 24.24m Wally J One in the lead, followed by 28.55m Open Season, with Hamilton in third.

There is nothing like a little healthy competition between classes, and in the J Class show down, Velsheda, Shamrock V, Hanuman and Lionheart lined up for the start. Rainbow was on display at the Monaco Yacht Show and didn't make it to the race course as she was not able to shift from show mode to race mode in a day. Hanuman led at the start, rounding the first windward mark ahead of her competition, but only two boat lengths ahead of Velsheda who was only three boat lengths ahead of Lionheart with an exciting start to the race. Velsheda gained the advantage on the next four-mile leg and took the next mark ahead of Hanuman. Yet on the short last leg, Hanuman took line honours by seconds. Velsheda still won on corrected time, closing out Hanuman's run of regatta first-place wins this year.

And inspired by the J Class, the first Tempus 90 superyacht Tempus Fugit showed off her racing prowess in the IRC A Class, racing alongside another new class mould-breaker, Claasen Shipyards-built F Class yacht Firefly and new launches such as Vitters' Inoui. Racing in the IRC classes was shortened to 20 miles fro the IRC A, B and C Classes and for the IRC C, D and E classes to 15 miles due to wind conditions. Race one had Aragon in the top of the standings in IRC A.

Today, both the Modern yachts and the Classics head out to the course. Stay tuned for more results and photos.