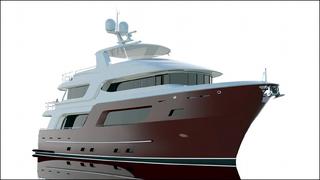 On October 25th we reported that Northern Marine had announced a new contract for a 27m pocket expedition yacht called Blood Baron and, hearing that Fraser Yachts may have been involved, I make a fews calls to discover that Josh Gulbranson brought the buyer.

She has been designed by the yard’s in-house team in collaboration with Adriel Design and Aaron Pufal, who will skipper her. A notable feature is her extended superstructure that brings the pilothouse aft to create a large panoramic skylounge.

A true tri-deck yacht, she will accommodate 8 guests in a full-beam master suite on the main deck and a VIP and two double cabins on the lower deck.

Scheduled to be launched in the summer of 2013, Josh says Blood Baron was asking $7.2 million.