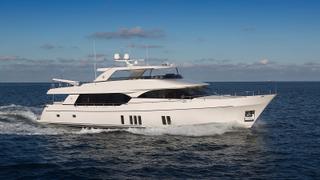 A brand-new 30.53 metre Ocean Alexander motor yacht, offered for sale by Marinemax, has been sold with Chris June and Mark Osterhaven at Worth Avenue Yachts introducing the buyer.

Now named Drinkability, she was built in GRP by the Taiwanese yard with exterior styling and interior design by Evan K Marshall and delivered earlier in 2017 as hull number seven in the yard’s OA100 series. Accommodation is for eight guests in four cabins consisting of a main-deck master suite, lower deck VIP suite, and port and starboard twins convertible to doubles. All cabins have entertainment centres, LED television screens and en-suite bathroom facilities.

The saloon has enlarged windows providing ample natural light, satin-finished wood panelling, custom-made furniture, a bar and an entertainment centre including a 60-inch television screen and a blu-ray audio/visual system.

Exterior spaces are generous and include a sheltered aft deck with al fresco entertaining and dining on built-in upholstered bench seating, a table, wet bar, fridge and a barbecue grill. Up on the large flybridge, guests can choose between a soak in the four-person Jacuzzi, drinks at the bar, seating on three Stidd helm chairs, or entertainment via the 32-inch flip-down television screen, which is built into the hardtop.

Twin 1,920hp MTU diesel engines give her a cruising speed of 16 knots and she is fitted with zero-speed stabilisers.