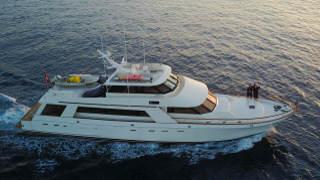 The 28.35 metre motor yacht Dun Diggin has been sold by Denison Yachting in an in-house deal.

Built in GRP to a design by Ed Monk Jr, her hull was built by US yard Nordlund and completed by McQueens with delivery in 1988. Accommodation is for eight guests in four cabins consisting of a master suite, VIP suite and two doubles, all with entertainment centres, Sharp television screens and en suite bathroom facilities.

The aft deck is fully enclosed and can be heated or air conditioned, seating eight guests at a circular table with a built-in ice maker for pre-dinner cocktails. A large main saloon has an L-shaped settee to starboard facing a wet bar, cocktail table, two occasional chairs and an entertainment centre to port including a built-in Vizio television screen and is adjacent to the formal dining area with nine matching upholstered chairs. Further forward is the ‘country kitchen’ style galley with six large windows and a full range of commercial grade kitchen equipment.

She was purchased by the previous owner over 25 years ago and has cruised the US West coast from Alaska to Mexico. In addition to being a very comfortable boat at sea, she is economical to operate in both running costs and routine maintenance. Twin 860hp Caterpillar diesel engines allow a comfortable cruising speed of 12 knots topping out at 17 knots.