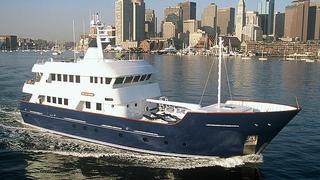 A rugged expedition yacht, she was built by Newcastle Marine in 2001 and accommodates eight guests in a full beam master suite, VIP stateroom and two twin cabins while two 400hp Caterpillar engines give her a cruising speed of 13 knots.