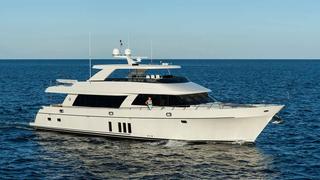 A 27.5 metre nearly-new motor yacht has been sold by J R Wills in the Newport Beach, California, office of Alexander Marine.

The new owners are repeat clients and intend to use the yacht primarily on the US West Coast. Built in GRP by Taiwanese yard Ocean Alexander to a design by Evan K Marshall, she was delivered in 2014 as an Ocean Alexander 90 model and has been used as a dealer demonstrator model with only 250 hours on her engines. Never registered, she came with full yard warranties.

An interior in satin finished walnut sleeps eight guests in four cabins including a master suite with a king sized bed and all cabins have en suite bathroom facilities. The saloon is open plan and has a lounge area with comfortable seating, a bar and an entertainment centre including a 55 inch LCD television and a Dolby sound system. Emperador marble is used for the counter tops on the bar, television cabinet and the divider to the dining area.

Up on the pilothose is a helm station and a dinette for casual meals through the day while the flybridge has all the amenities for al fresco relaxation, including a flip down 24 inch LCD television, a raised settee with table, a four person Jacuzzi, an electric barbecue and a hard top with a retractable awning.

She is powered by twin 1,925 MTU diesel engines and is fitted with zero speed stabilizers.