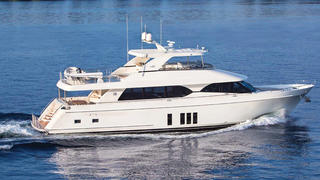 The 26.14 metre motor yacht My Reward, listed for sale by Chris June at Worth Avenue Yachts, has been sold with Chris Collins at Ocean Independence introducing the buyer.

Built in GRP by Taiwanese yard Ocean Alexander to a design by Evan K Marshall, she was delivered in 2016 and has been well maintained since. Her interior in satin finished mahogany, also by Evan Marshall, accommodates eight guests in four cabins consisting of a master suite, VIP suite, double and a twin, all with entertainment centres, LCD television screens and en-suite bathroom facilities. There are also quarters for three crew in two en-suite cabins.

The saloon is open plan and features extra-large windows, a custom L-shaped settee and chairs on a cream carpet, a wine cooler, ice maker and an entertainment centre including a 46-inch LCD television screen and a professional sound system. Forward is a formal dining area with a custom built table and chairs seating eight guests.

The aft deck is floored in teak and offers many happy hours of al fresco entertainment with built-in upholstered bench seating, a teak table and a wet bar plus a waterproofed television screen mounted on the aft bulkhead above the bar. Up on the flybridge are three Stidd helm chairs, U-shaped built-in seating, tables, hot tub, full wet bar and an electric barbecue grill.

Her twin 1,622hp Caterpillar diesel engines have logged only 490 hours to date and remain under warranty. They give My Reward a cruising speed of 18 knots, topping out at 24 knots