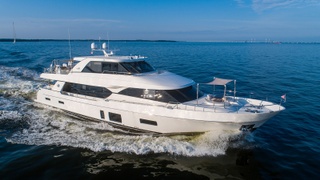 The 30.68 metre motor yacht The Rock, listed for sale by Raymond Young at RJC Yacht Sales for just three weeks, has been sold with the buyer introduced by the Miami Maritime Group.

Built in GRP by Taiwanese yard Ocean Alexander, The Rock was delivered early in 2019 as a 100’ skylounge model and still has all yard warranties in place. Accommodation, designed by Evan K Marshall using walnut panelling and fine fabrics throughout, is for 10 guests in five cabins laid out as a main deck master suite, two VIP suites and two twins. All guest cabins have entertainment centres, LED television screens and en suite bathroom facilities while the crew quarters sleep five staff.

In the main saloon lounge area, guests are offered custom upholstered settees, a marble- topped wet bar and a sophisticated entertainment centre including a large screen television set. In the dining area, a walnut table is surrounded by ten upholstered chairs and storage for crockery and cutlery.

Upstairs in the skylounge is an L-shaped leather settee, occasional chairs, a granite-topped wet bar and an entertainment centre including a 50-inch LED television screen.