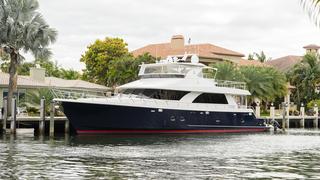 The 24.69 metre motor yacht VitaminSea, listed for sale by Stephen Moynihan at HMY Yacht Sales, has been sold with Alexander Marine representing the buyer.

Built in GRP by Taiwanese yard Ocean Alexander to a design by Ed Monk Jr,VitaminSea was delivered in 2009. Decorated throughout in Sakura wood paneling, she accommodates six guests in three cabins consisting of a full beam master suite with a king sized bed, a VIP suite with a queen sized bed and a twin cabin, all with entertainment centres and en suite bathroom facilities.

A large open plan saloon has a custom L-shaped settee, two occasional armchairs, remote controlled blinds, an onyx bar with four bar stools and an entertainment centre including a 40 inch Sony flat screen television. Forward is a formal dining area around a burl wood table and the galley, equipped with all the latest appliances.

Outdoors, the aft deck and flybridge can be fully enclosed, meaning that they can be either heated or air conditioned. The aft deck has built in upholstered seating and occasional chairs for eight guests relaxing al fresco and comes with a bar, fridge and sink. Up on the flybridge are two helm chairs and L-shaped seating aft, along with another television screen, a wet bar and a fridge.

The cockpit has a teak deck, a bait well, access to the crew quarters and two Bluewater Sailfish fighting chairs. Twin 1,650hp Caterpillar engines power her to a cruising speed of 21 knots.