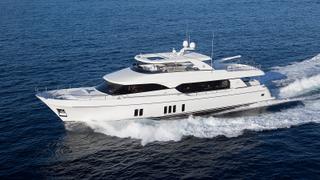 The 30.53 metre motor yacht Where’s Waldo, listed for sale at MarineMax, has been sold with the buyer introduced by Alan Bernard at Luke Brown Yachts.

Built in GRP by Taiwanese yard Ocean Alexander to a design by Evan K Marshall, Where’s Waldo was delivered in 2015 as an OA100 skylounge model. Her interior in satin varnished walnut accommodates up to eight guests in four cabins comprising a master suite, VIP suite and two twins, all with entertainment centres, LCD television screens and en suite bathroom facilities. A further three cabins sleep can sleep up to five crewmembers.

The saloon is open-plan and features a custom L-shaped settee and chairs on wooden floors, a wet bar, wine cooler, ice maker and an entertainment centre including a 55-inch LCD television screen and a Dolby stereo surround sound system. Forward is a formal dining area with a custom-built table and chairs seating eight guests. The adjoining galley has granite work tops, modern appliances and a U-shaped dinette for informal snacks.

Up in the skylounge is a helm station with complete instrumentation, a wet bar, ice maker, comfortable settees and a flip-down 32-inch television screen.