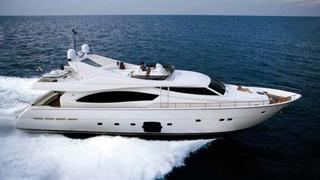 Marc Haendle at Ocean Independence tells me that he's brought the 27m motor yacht Chrimi back to the market, now intriguingly renamed Louis and the Girls.

Built by Ferretti in 2007, she's the 29th yacht from their flagship 881 series. Her design is a collaboration between Studio Zuccon International Project and the Ferretti Engineering Division. Constructed in GRP, she can accommodate eight guests in four cabins and two 2200hp MTU engines can propel her to a speed of 31 knots.

Currently located in Mallorca, Louis and the Girls is asking €2.75 million.