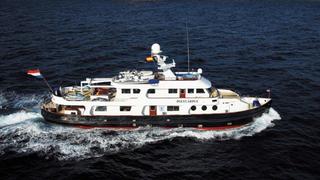 Axel Douque at Ocean Independence in Zurich tells me he's sold the 34.6m motor yacht Polycarpus to a direct client.

Polycarpus has a long history, having been built by France’s Arsenal yard in 1949 as one of a series of 10 sturdy tug boats. In 2003, her buyer took this strong hull to Holland’s Gielen yard for conversion into a superyacht with modern systems, equipment and finish. Today, Polycarpus sleeps 12 guests in six cabins and has every conceivable amenity, including an open top deck with Jacuzzi.