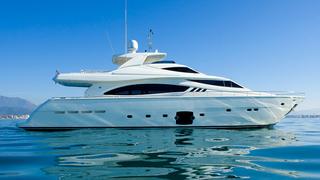 Nicholas Dean at Ocean Independence tells me that he and Tom Walden have listed the 27.03m raised pilothouse motor yacht Juna for sale.

Built to RINA class as one of the Ferretti 88 series in 2008, Juna has a light, contemporary interior and has been used solely as a private yacht in the Mediterranean. Accommodation is for up to 10 guests in a master suite, VIP stateroom and two twin cabins, each with a Pullman berth. Two 2200hp MTU engines give Juna a cruising speed of 18 knots.