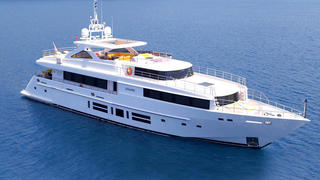 The 39 metre motor yacht Indiana has changed central agencies and is now listed for sale by Nicholas Dean at Ocean Independence.

Designed by Joachim Kinder with Platinum Superyachts, she was built in epoxy laminated wood by Turkish yard Bilgin to RINA class and delivered in 2010. Accommodation is for 10 guests in five cabins consisting of a master suite with 180 degree panoramic views, two double VIP suites and two twins, all with entertainment centres, Samsung television screens and en suite bathroom facilities. In addition, she has quarters for up to seven crew.

The open plan saloon of this yacht for sale has settees configured in a U shape to port, a bar and an entertainment centre including a 55 inch Samsung television screen on a rise and fall mechanism while forward is a formal dining area with seating for 10 guests.

A popular yacht on the charter circuit, she has several deck areas for al fresco entertaining and relaxation, including a sheltered aft deck, a sun deck with a bar, Jacuzzi spa tub and loungers, and a flybridge offering a barbecue grill and seating protected from the sun by a hard top.

Twin 2,400hp MTU diesel engines give her a range of 880 nautical miles at her cruising speed of 11 knots and she is fitted with Trac digital fin zero speed stabilisers.