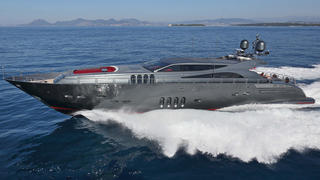 The 34.1m motor yacht Koji, listed for sale by Burgess, has been sold with Alex Koersvelt at Edmiston & Company introducing the buyer.

Built in Kevlar and GRP by Italian yard Arno to a design by Andrea Bacigalupo, she was delivered in 2012 as one of the yard’s Leopard 112’ models. An interior by Laura Pomponi of Luxury Projects features soft furnishings in vivid colours, contrasted with deep espresso wood floors accommodating up to seven guests in three cabins.

These consist of a full beam master suite amidships, a VIP suite and a twin with a Pullman berth, all with entertainment centres, television screens and en suite bathroom facilities. In addition, there are quarters for five crew.

The open plan saloon offers two generous sofas, a large table and a wet bar along with an entertainment centre including a 55 inch Loewe television screen. A day head is forward on the port side while forward to starboard and below the helm station is a fabulous home cinema.

The aft deck is adjacent to the saloon and offers three built in sofas grouped for optimum socializing in the refreshing sea air, a double sun pad and partial shade. Further aft, the extended swim platform makes use of water toys effortless. On the foredeck is a massive built in sun pad and a small cocktail area. Triple 2,400hp MTU diesel engines linked to KaMeWa water jets power her to speeds in excess of 40 knots.