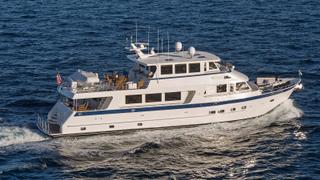 The 26.3 metre motor yacht HQ, listed for sale by Joel Davidson and Mike Schichtig at Outer Reef Yachts, has been sold in an in-house deal.

Built in GRP by Taiwanese yard Outer Reef Yachts, HQ was delivered early in 2017 as the second hull in its Outer Reef 860 Deluxbridge series. Accommodation on this tri-deck motor yacht is for up to eight guests in four en-suite cabins, including two doubles, a twin cabin, and an amidships full-beam master suite, complete with walk-in wardrobe, and all cabins have Samsung television screens. Meanwhile, the crew quarters allow for a staff of two people.

The main deck features an al fresco dining area, which leads into the saloon, with casual seating, a bar and a circular card table. The country kitchen style galley is located further forward, with an adjacent breakfast bar and day head opposite.

However, it is the upper deck that is the real star of the show, with an open aft deck that can be used as a tender garage as well as an enclosed skylounge with bar area, informal seating and a second day head.