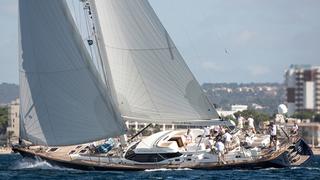 Fiona McCarthy at Oyster Yachts in Palma tells us the brokerage has just closed the sale of the elegant Oyster 82 sailing yacht Dama De Noche.

Designed by Rob Humphreys and built in 2008, the ninth yacht of the 20 Oyster 82s was sold to a British yachtsman who is trading up from an Oyster 54. The asking price of £2,500,000 has bought him a powerful long-legged yacht which can comfortably clock up 240 miles a day on passage. An immaculate one, too – only ever used by a meticulous owner and his family, the immaculate Dama De Noche won the Concourse d'Elegance award at the Oyster Palma Regatta in 2013.

Hydraulic sail handling and in-mast furling for the North Sails allow easy control of the cutter rig without a dedicated crew – the previous owner cruised Dama De Noche in the Pacific (she was shipped back) as well as the Med and Caribbean – and helming in the superyacht-style cockpit is light from twin wheels.

She's comfortable below decks, too. An upper salon with a huge table and settee is at window height for great views – one reason why the large navigation/computer area is here. The lower salon features two wraparound seating areas for loungning and dining, both finished in aged leather and with maple joinery to keep the style light and modern. Accommodation is for 10 in five cabins: a full-beam master cabin at the stern, two doubles and two twins, including a forward cabin that can be used for crew.

McCarthy tells us the new owner will keep her in Palma for winter and intends to cruise the Med next summer.