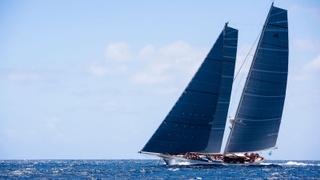 The 55.11 metre sailing yacht Adela has been listed for sale by Alex Busher at Edmiston & Company.

Originally launched in 1903 and rebuilt with a steel hull and superstructure by British yard Pendennis to a design by Dykstra Naval Architects, Adela was delivered in 1995 and has only ever been used privately. Accommodation is for eight guests in four cabins comprising a master suite, double and two twins. The master suite has a television screen and all cabins come with en suite bathroom facilities while a further four cabins sleep nine crewmembers aboard this yacht for sale.

Over the years, Adela has enjoyed numerous refits at the Pendennis shipyard, including a five metre hull extension in 2000 and a full engineering overhaul, complete with new generators and new paint in 2012. Today, she boasts a classic profile blending traditional fittings with modern technology within her sumptuous interior as well as on deck.

Custom made blocks and winches, concealed state of the art communications and a modern climate control system, all provide the comfort and convenience one would expect on a modern superyacht. Since her initial restoration Adela has seen an extensive maintenance programme which includes rigging, full engineering overhaul, new generators, new paint, teak decks, plus minor interior and electrical work. Under power, a single Lugger 640hp diesel engine delivers a range of 1,200 nautical miles at 10 knots.