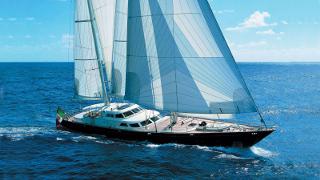 The 37 metre sailing yachtKhaleesi, listed for sale by Burgess, has been sold in an in-house deal

Formerly known as Northern Spirit, she was built to ABS class by Italian yard Perini Navi and delivered in 1996 with a refit in 2016 that included a full repaint and an engine room overhaul. Large portholes give her a bright, airy ambience and, with cherry wood paneling throughout, she accommodates six guests in three cabins. These consist of a master suite and two twins, one with a Pullman berth, and all cabins have en suite shower facilities, In addition, there are quarters for five crew.

The large main saloon has comfortable seating on two settees and an armchair, a coffee table and a walnut dining table plus an entertainment centre including a large plasma television screen and a stereo surround sound system. There is also WiFi internet access throughout.

There is plenty of space for outdoor enjoyment on the main deck, featuring a cockpit that fulfils a dual function in that one half has circular seating for eight guests around a coffee table while the other half is fitted for al fresco dining, again for eight guests.