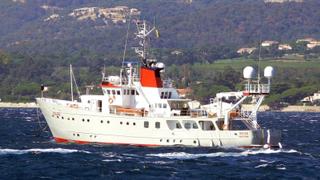 The 36 metre explorer yacht Solea, listed for sale by Bertrand Vogele at Seaminds in Monaco, has seen a price reduction of €400,000.

Built in steel by German yard Sieghold, Solea was delivered in 1974 as an ice-classed research vessel for the German government. In 2004 she came into private hands and was completely rebuilt as a luxurious globe-trotting explorer yacht with all mod cons. She was also further upgraded in 2009 and is Germanischer Lloyds classed.

Accommodation is for 12 guests in six cabins comprising three doubles and three twins. All guest cabins have entertainment centres, television screens and en suite bathroom facilities while the crew quarters sleep seven members of staff aboard this yacht for sale.

In the main deck saloon, the dining area is aft with seating for 12 guests at a large table while forward is the lounge area offering comfortable seating on a variety of settees and armchairs and there is also an entertainment centre featuring a large screen television set.

Outdoors, she boasts one upper sundeck and two huge deck spaces, entirely covered with teak, accommodating areas for sunbathing, al fresco dining and entertaining. Her top speed is 12 knots and she allows a maximum cruising range of 5,000 nautical miles at 10 knots with power coming from an 870hp Deutz SBA6M528 diesel engine.