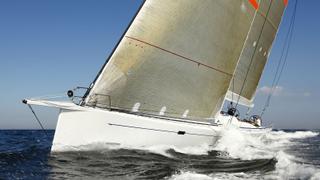 The 24.5 metre sailing yacht Singularity, listed for sale by Joost Goverts at Northrop & Johnson, has had a €280,000 price reduction.

Built in carbon composite by Australian yard McConaghy Boats to a design by Lutra Design, Singularity was delivered in 2010. Her canting keel, carbon fibre rig with a square top mainsail, high aspect rudder and maximum waterline indicate that her design was optimised for Mediterranean racing. Her interior by Design Unlimited in vertically grained teak offers accommodation for up to four guests in a master suite and a large double cabin, both with en suite shower facilities. There are also quarters for four crew on bunk beds aboard this yacht for sale.

The saloon has room for six guests around the dining table and also offers a lounge and study area along with an entertainment centre including a 32-inch LCD television screen and a Bose Lifestyle stereo surround sound system.

On deck, the layout is efficient for both racing and cruising, with the winches clustered around the twin helm stations, close enough for good short-handed sailing, but with enough space for a racing crew to operate. A separate cockpit forward of the working area is a great al fresco lounging space in cruising speed and doesn't detract at all from her racing efficiency.

She is fitted with a Southern Spars mast and a Park Avenue cruising boom, while under power a 240hp Yanmar diesel engine gives her a cruising speed of ten knots.