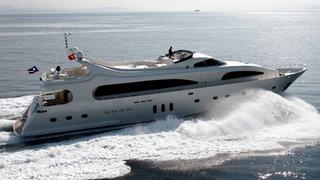 Natalie Gehrke at Yacht Marine gets in touch with news of a significant price cut of €650,000 on the 33 metre motor yacht Nira.

Built by Turkey’s Mengi-Yay yard in epoxy laminated mahogany to a design Kerim Demir, Nira was launched in 2007 and is classed by RINA.

Her interior was designed by Studio Aegean and is laid out to accommodate 10 guests in a master suite on the main deck, a further master below, plus a VIP and two twin cabins. Her flybridge features a large spa pool.