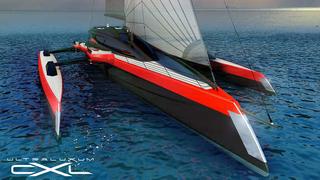 A call to Peter Bennett at bluewater brings news that he’s now been appointed exclusive central agent for the sale of Tamsen’s high-concept 48m trimaran sailing yacht, the Ultraluxum CXL.

The CXL concept is the brainchild of Jean-François Ruchonnet, founding partner of Ultraluxum, and was developed by designer Jean-Jacques Coste of Coste Design & Partners. With a length of 48 metres, the sloop-rigged trimaran would become the largest multihull superyacht in the world.

The concept’s main innovation is its folding hull beams, which can reduce its overall width from 23 metres in a sailing configuration to 11 metres in harbour mode, making it the first trimaran able to berth in St Tropez.

Bureau Veritas classed, the CXL will be built in sandwich epoxy resin and carbon fibre, with an overall weight of 110 tons. She will have a 55 metre mast and a total sail area of 1,200 square metres, giving top speeds of between 20 and 25 knots. Diesel-electric propulsion will be an option, enabling her to reach 15 knots under power, with a 40 per cent reduction in fuel consumption compared to a monohull of the same size.

The modern interior designed by Coste Design & Partners and Ultraluxum’s owner Jessica Sbaraglia, and will accommodate six guests in a master suite and two guest cabins, all en suite.