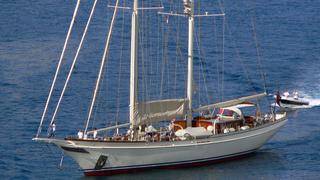 Royal Huisman sailing yacht Lethantia Back on the Market

Sold in April 2017, the 43.95 metre sailing yacht Lethantia is back on the market, listed for sale by Burgess.

Built in aluminium by Dutch yard Royal Huisman to a design by Henk Lunstroo, Lethantia was delivered in 1994 as a gaff-rigged schooner and, having undergone a full refit in 2017 including a full repaint, rig service and redesign of the master cabin, and a further refit in 2019, she is in turn-key condition for a new owner. John Munford designed a timeless interior in varnished cherry wood panelling sleeping six guests in three well-appointed cabins consisting of a master suite and two twins, all with entertainment centres, Samsung flatscreen televisions and en-suite shower facilities. There is also accommodation for six crew in three cabins aboard this yacht for sale.

The saloon shows the touch of a master interior designer, incorporating teak and cherry woods along with fine leathers to create built-in settees, storage cabinets and dining facilities along with a discreet entertainment centre featuring a 20-inch Sharp Aquos television screen and a Bose stereo surround sound system.

Deck spaces are generous and safe, offering several areas to relax or dine under a series of awnings made of sail cloth, while high bulwarks ensure that the decks remain dry even in inclement weather. Refitted and upgraded many times in her long life, she now has no fewer than 41 Rondal deck winches and a full wardrobe of North sails. Under power, a single 650hp MTU diesel engine gives her a cruising speed of 11 knots.