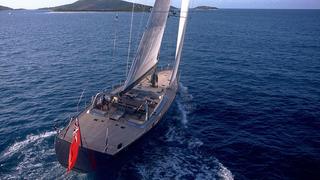 Sailing superyacht Wally B now for sale with Edmiston and Fraser

The 32.72 metre sailing yacht Wally B has had a central agency change and is now jointly listed for sale by Edmiston & Company and Fraser.

Built by UK yard Pendennis with naval architecture by Brenta Design and interior styling by Lazzarini Pickering, she was delivered in 1998 by Wally Yachts. Refitted in 2002, she sleeps six guests in three cabins consisting of a large master suite and two doubles, all with en suite shower facilities.

A large saloon on this yacht for sale has a lounge area with comfortable L-shaped seating on settees upholstered in white fabric and there is an entertainment centre including a large built in television screen while forward is a dining area with seating for six guests.

Timeless in design, her carbon composite construction makes her very light, fast and surprisingly simple to handle under sail. And her open uncluttered decks — with hidden control lines — make moving around simple and effortless. Under power, a single 385hp Scania engine gives her a range of 1,500 nautical miles at 10 knots.

She was bought by her current owner in 2011 and during the winter of 2012/13 had major work undertaken including full new sails, new teak throughout and all engineering was serviced and rebuilt. She also had full new audio visual systems installed.

Furthermore, in 2016 she underwent her 15 year Lloyds survey, had a fresh paint job on her hull and had a new keel fitted so she is in excellent condition.