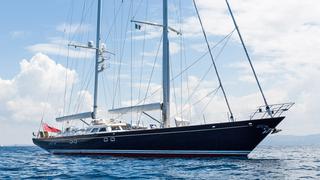 The 36 metre sailing yacht Yanneke Too, jointly listed for sale by Burgess_ _and Yachtzoo, has been sold with Ardell introducing the buyer.

Built with a hull in Kevlar and epoxy around a cedar wood core and a GRP superstructure by England's Camper & Nicholsons yard to a design by Dixon Yacht Design, she is ABS classed and was launched in 1996 with a refit in 2015. She was the first superyacht to be designed by Bill Dixon but sadly, she was the last yacht to be built by this venerable yard. With only two owners since new, she represented a great opportunity to acquire an historic, well-maintained vessel

Interior design is by Terence Disdale and employs rich, hand-picked cherry wood joinery to create a striking effect. A large bird’s-eye maple and briar table in the main saloon provides dining for four, and can be extended to accommodate eight guests. Accommodation is for six guests in a master suite aft, a double and a twin cabin. All cabins come with Russound multi zone music controllers and en suite shower facilities.

A twin masted schooner, she has a pair of Omohundro carbon fibre masts coupled with an in boom furling system by Marten Marine. She was designed with a shallow draft, enabling access to all those sought- after anchorages at sheltered bays and coves.

Under sail, her top speed is recorded at 12 knots and under power a single 470hp Lugger engine gives her a cruising range of 3,000 nautical miles at eight knots.

Yanneke Too was asking €1.8 million.