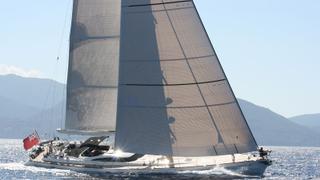 The 30.48 metre sailing yacht Havana of London has had a central agency change and is now listed for sale with Jochen Brill at Northrop & Johnson in Palma.

A cutter rigged sloop, Havana of London was designed by Bill Dixon and built by Dutch yard Vitters in cedar and epoxy to ABS class and delivered in 2000. Her second owner bought her in 2006 and has spent considerable amounts of time and money keeping her in first-class condition. A luxurious pear wood interior accommodates six guests in a large master suite and two twin cabins, along with quarters for a crew of four aboard this yacht for sale.

A refit in 2014 included a new main engine, generators and sails, and she was further refitted earlier in 2018. She has beautiful lines and a very clean deck space, which makes for easy sail handling as well as open lounging areas. A further advantage is that she is coded for charter in the Balearic islands. Under power, a 374hp MAN engine gives her a range of 3,200 nautical miles at 10 knots.