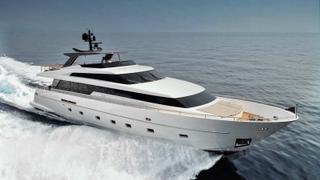 The 28.26 metre motor yacht BorealII, listed for sale by Pierre Vezilier at MySea, has been sold with Glen Moltoni at One Brokerage Australia introducing the buyer.

Built in GRP by Italian yard Sanlorenzo to a design by Francesco Paszkowski, BoreaI II was delivered in 2012 as one the yard's SL94 series and is Bureau Veritas classed. Accommodation is for eight guests in four cabins consisting of an amidships master suite, forward VIP suite and two twin cabins, all with underfloor heating, television sets and en-suite bathroom facilities. She boasts all the latest technology, including satellite television and WiFi internet access.

The SL94 range has large windows and portholes bringing natural light inside and has contemporary lines to her silhouette. The saloon lounge area offers generous seating on settees and armchairs, a bar, fridge and an icemaker, along with an entertainment centre including a large screen Sony television and a Bose stereo surround sound system.

Outdoor spaces are plentiful and include a large flybridge with all the necessities for al fresco entertaining and dining, including comfortable seating, a wet bar, fridge and an electric barbecue plus a hard top providing welcome shade.

Twin 2,185hp MTU 16V2000 M84 diesel engines give her a cruising speed of 23 knots, topping out at 28 knots, and she is fitted with digital fin zero speed stabilisers.