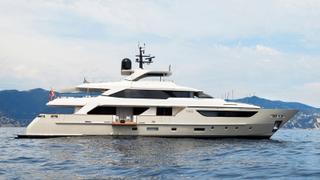 The 37.95 metre motor yacht Y4H, listed for sale by Marc Haendle and Lukas Stratmann at Ocean Independence, has been sold with buyer introduced by Atilla Oeder-Erickson at Sanlorenzo Spain.

Featuring exterior styling by Francesco Paszkowski, Y4H was built from a GRP hull and superstructure by Italian yard Sanlorenzo and delivered in 2017 as one of the yard’s SD126 series. Her naval architecture was developed in-house and, with a semi-bulbous bow, she features a beam of eight metres and a maximum draught of 2.33 metres.

Accommodation is for ten guests in five cabins, including a master suite, two doubles and two twins, all with entertainment centres and en suite bathroom facilities, while the crew quarters allow for a staff of up to six people.

The large saloon has ample seating on an L-shaped sofa and armchairs, along with coffee tables and an entertainment centre including a 42 inch television screen and a stereo surround sound system. The aft deck welcomes al fresco dining and entertaining on a selection of chairs and tables while the sun deck offers a Jacuzzi spa tub and sun loungers. Up on the flybridge is a barbecue grill, fridge, ice maker and a seating area shaded by a custom hard top. More sunbathing is available on the loungers and sun pads situated on the foredeck while the sky lounge plays host to comfortable seating and an entertainment centre featuring a 37 inch television screen.

A semi-displacement cruiser, Y4H is powered by twin MTU diesel engines for a top speed of 17 knots. When trimmed back to her cruising speed of 11 knots, she has a maximum range of 3,000 nautical miles.