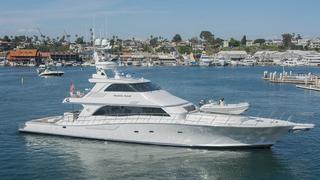 The 30 metre sportfish motor yacht Acero Azul, listed for sale by The Crow’s Nest, has been sold with Chuck Hovey Yachts introducing the buyer.

Built in GRP by Canadian yard Queenship, Acero Azul was delivered in 2002 and is a well-known sight along the US West Coast as she cruises from Panama to Alaska in search of prime fishing grounds. Accommodation is for eight guests in four cabins consisting of a master suite amidships, a VIP suite forward, a double and a twin, all with entertainment centres, television screens and en suite bathroom facilities.

The saloon has a large U-shaped settee to port with two tables and an insert for formal dining along with two leather armchairs, all facing a starboard entertainment centre including a 50 inch Samsung flat screen television screen. Forward is a galley featuring a centre island with four stools and a U-shaped dinette for six guests dining informally.

The aft deck has a large dining table with seating for eight, a dive compressor, ice maker and a waterproof 20 inch television screen. A spiral stainless steel and teak stairway leads up to a sky lounge with two helm chairs, full instrumentation, 360 degree views, L-shaped seating and a fold down television screen.

More al fresco enjoyment is available on the sun deck, with an aft facing bench seat, a coffee table and a drinks fridge. Twin 1,800hp MTU engines give her a range of 1,500 nautical miles at 10 knots.