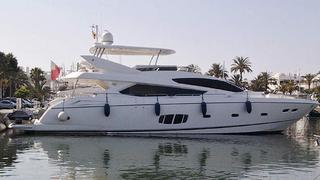 Jon Forde at Dbeere Yachts tells me he and Debbie Beere have taken over the sales listing of the 24.4m motor yacht Noah White.

A one-owner yacht, Noah White is a Sunseeker 80 dating from 2010 and accommodates eight guests in an Italian-influenced interior. Twin MTU V12 2000 M93 engines give her a cruising speed of 24 knots.