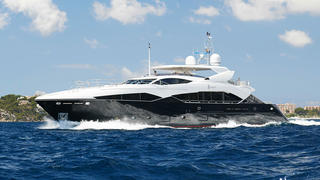 The 39.12 metre motor yacht Stargazer has had a central agency change and is now listed for sale by William Burns at Sunseeker London.

Built in GRP by British yard Sunseeker International, Stargazer was delivered in 2012 as a Sunseeker Predator 130 model. A lavish bespoke interior by Ken Freivokh accommodates up to ten guests in four cabins. These consist of a spacious main-deck master suite with a sea balcony to the port side, while on the lower deck are a further three guest cabins including a full beam VIP suite and two equal queen sized doubles both fitted with an additional Pullman berth. All cabins have entertainment centres, Beo Vision television screens and en suite bathroom facilities. The crew area aboard this yacht for sale has a galley and crew mess, along with accommodation for up to seven crewmembers in three bunk cabins and a separate captain’s cabin.

Built according to the yard’s Platinum Package specifications, Stargazer comes with a huge variety of extras and is in pristine condition. The main saloon offers comfortable seating, a bar and an entertainment centre including a 50-inch Beo Vision plasma television, a Kaleidescape on-demand audio/video system, plus the bonus of sea balconies to port and starboard.

Up on the flybridge is built-in seating, a wet bar, fridge and ice maker, a four person Jacuzzi and two 32-inch television screens mounted under the hard top. Twin 3,508hp MTU diesel engines give her a cruising speed of 12 knots and she is fitted with Trac zero speed stabilisers.