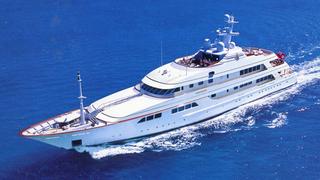 Feadships are proving popular at the moment - following the recent sales of Drizzle and Sweet Pea, comes news that Peter Insull has sold the 62.33m Fortunato, a joint listing between Robert Shepherd at Edmiston and Merle Wood and Peter Croke at Merle Wood & Associates.

Fortunato was designed by De Voogt and built at the Royal Van Lent yard in 2000. She has a steel hull and aluminium superstructure, and is fitted with a modern Koop stabilization system that reduces roll motion effect, resulting in a smoother cruising experience.

Up to 14 guests can be accommodated in a master suite and six double staterooms. Power comes from two 2000hp Caterpillar diesel engines, which provide a top speed of 17 knots and a range of 5,800 nautical miles at 13 knots. She recently emerged from a multi-million dollar refit.