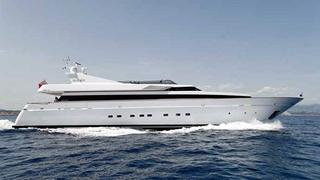 Superyacht Gladius for sale with Cecil Wright & Partners and Burgess

She was delivered in 2007 by Italy’s Cantieri di Pisa yard, built to ABS class and is MCA compliant. Her interior by Carlo Paladini accommodates up to 12 guests in a master, two doubles and two twins along with two Pullman berths, and she has a cruising speed of 24 knots with a range of 700 nautical miles at 21 knots.