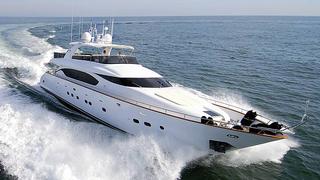 She was built in 2005 but delivered and first registered in 2007. She’s in excellent condition, the owner having made considerable investments this winter in deck work, interior refinishing, new exhausts, paintwork, 1000-hour engine service and so on. Ifa Cannes is also MCA certified and her 5-year survey was done last May. She's asking € 2.2 million but the owner has instructed Ivan to seek offers as he really wants to achieve a quick sale.